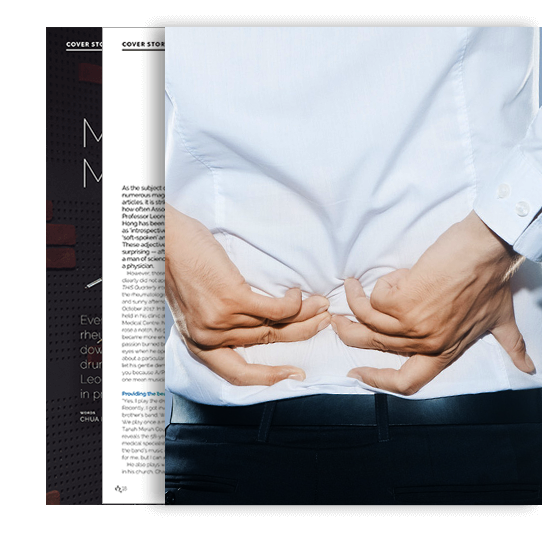 When
It's More Than
Back Pain

Chronic pain in the lower back can be more significant than you realise. Learn about spondyloarthropathy and how to spot the signs.

Spondyloarthropathy causes back pain, joint pain and inflammation, and can be mistaken for other types of pain. This is because awareness of this autoimmune disease tends to be low. And because the condition affects younger people, many downplay and manage the symptoms until the condition worsens.

In spondyloarthropathy, the immune system gets confused and attacks the body. The term refers to a family of long-term diseases of the joints that include ankylosing spondylitis, Reiter's syndrome (reactive arthritis), psoriatic arthritis, and joint problems linked to inflammatory bowel disease (enteropathic arthritis). While each of these specific conditions present different symptoms and outcomes, they are similar in that all of them:

Ankylosing Spondylitis causes stiffness and lower back pain. In severe cases, the affected joints in the spine fuse together. In children, the signs start in the hips, knees, heels or big toes, and progress to the spine. Other areas such as the chest wall and heels may also be affected.

Psoriatic Arthritis is a type of arthritis associated with psoriasis (scaly red patches on the skin). This rash precedes the arthritis symptoms, sometimes by years. Fingernails and toenails may also become thickened and yellow. Psoriatic arthritis involves both small and large joints, such as the fingers, toes, knees, hips and sacroiliac joints (tailbone).

Enteropathic Arthritis is spinal arthritis that also involves inflammation of the intestinal wall. The arthritis affects large joints such as the knees, hips, ankles, and elbows.

Short-term medicine includes painkillers to reduce swelling and pain. It is more important to consider disease-modifying medication which controls the immune system, such as sulfasalazine and methotrexate. In recent times, research has shown a role for the newer biologic disease-modifying drugs such as anti-tumour necrosis factor agents that are now approved for use in several countries. They have been shown to be highly effective in treating not only arthritis of the joints but spinal arthritis associated with ankylosing spondylitis and related diseases. This class of drug attempts to block a protein that causes inflammation.