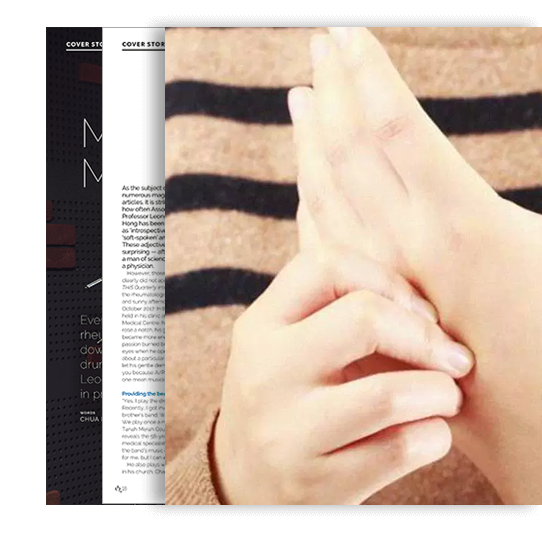 SCLERODERMA IS A RARE CHRONIC AUTOIMMUNE DISEASE THAT AS THE NAME SUGGESTS, HARDENS the skin. Scleroderma occurs as an autoimmune response, in which an abnormal immune system fails to recognise the body’s own tissues and attacks them. This response produces swelling (inflammation) and over production of collagen. Collagen is the tough protein that helps build connective tissues such as tendons, bones, and ligaments. Collagen also helps scar tissue form. When normal tissue from skin, lungs, the oesophagus, blood vessels, and other organs is replaced by this type of abnormal tissue, none of these body parts will be able to function normally.

In more serious forms of scleroderma, not just the skin, but the lungs, kidney’s blood vessels, the oesophagus and intestines, or the blood vessels from the heart that supplies the lung can be affected as well.

There are limited forms of the disease where only the skin is affected. One form is known as CREST syndrome.

The features are: Calcinosis (calcium deposits form under the skin), Raynaud’s phenomenon (this is when the hands turn blue red and white all at the same time in response to cold), Esophageal dysmotility (the swallowing tube that connects the mouth to the stomach is affected so much so that the patient has difficulty in swallowing), Sclerodactyly (hardening of the skin over the hands which can spread up the whole of the upper limb and even affect the face, trunk and abdomen, and Telangiectasia (these are masses of little blood vessels which form and look like spidery spots on the skin). The more serious form is called diffuse scleroderma or systemic sclerosis. This is where major organs such as the lung and kidneys are affected.

What triggers this autoimmune disorder? Most likely this disease is caused by a number of inherited (genetic) abnormalities, which are triggered by environmental factors. There have also been reports of a scleroderma-like illness which start after exposure to certain toxins. In an early stage of scleroderma, the hands may swell and only later will the skin tighten. Raynaud’s can be an early symptom. New problems of reflux and swallowing difficulty should also draw attention to the possibility of scleroderma especially if other symptoms are present. Cough and breathlessness tend to occur in advanced disease.

In the later stages, the skin tightening can be severe, causing the fingers to be squashed.

This is termed digital resorption. Severe Raynaud’s can also result in gangrene of the fingers because of poor blood flow. Kidney failure is another possible complication that is uncommon nowadays as there are many medicines which can prevent this.

Of greater concern is if the lung is affected. Hardening of lung tissue called pulmonary fibrosis, may occur. Besides this, patients can get pulmonary hypertension. This is when pressure in the pulmonary artery rises, which may result in early death. The pulmonary artery brings blood from the heart into the lungs.

Treatment of the underlying disease is important. Steroid medications may have to be used. Other medicines that suppress the immune system can be used depending on the severity. These include drugs like methotrexate, cyclophosphamide, mycophenolate mofetil. Medicines can be used to treat the Rayaud’s such as calcium channel blockers and sildanefil (Viagra). To lower the pulmonary pressure, iloprost, sildanefil, bosentan can be used.