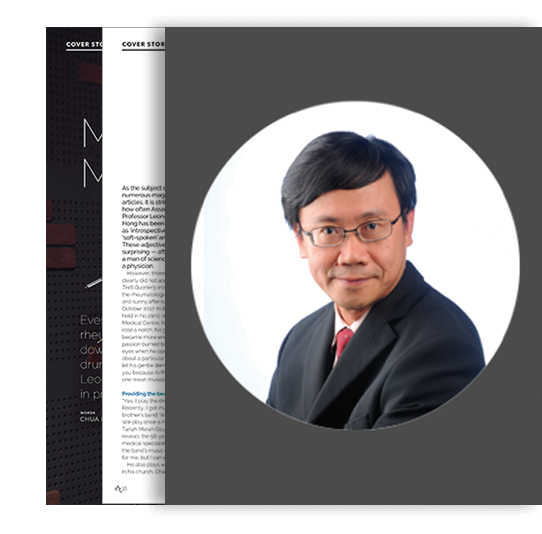 Teaching medicine is not the same as teaching other subjects. What we teach them doesn't just involve the head. It involves the head, heart, and hands.

Introspective seems the best word to sum up this quiet and soft-spoken doctor who was the inaugural and still current chairman of the Chapter of Rheumatologists at Singapore's Academy of Medicine. The field of rheumatology which is a relatively young medical discipline, and may be less glamorous than say surgery, he says but Dr Leong Keng Hong enjoys the cognitive aspect of it, as it suits the thinker in him.

"I like doing research, I like getting down to knowing what is causing the problem," he says, adding that "in internal medicine, the conditions are treated with medication, and there's immunology involved. It's basic science. The challenges are clinical - you make the right decision at the right time, and if you do it right, the patient will do well."

Dispensing medicine as a physician, he says, that requires research as all drugs have side effects and it's the job of the doctor to be aware of them - "You must monitor and assess, there is no blunder-bust treatment for all. Every patient is different", he stresses. Drugs sometimes suffer an unnecessary bad rep, he feels, when really their usefulness may outweigh the risks. As such a doctor needs to "know the dosage, the side effects, how the drug interacts, and consider the risk-benefits ratio. Some patients may not require drugs, while others do. Even if there are risks, the benefits may outweigh the risks, so you must weigh out the costs of not taking medicine", he says.

The genteel doctor is also an adjunct associate professor at the Yong Yin Lin School of Medicine at the National University of Singapore says that "Practicing good medicine is to have sound clinical judgement, ask the right questions, do the right test, prescribing the right treatment rather than being overly cautious and conducting test after test that only costs the patients more - that is what I aim to teach." But there is another side of it that isn't all science. One way of thinking about medical education is compassion and empathy. He says: "The compassion aspect of medicine is very important. The heart is very important and you can’t teach that through textbooks but role modeling." That is why the young medical students go to the wards to see and learn from doctors who are hopefully good role models, he explains. Medical education after all is "how to teach medicine better", he says.

The late Sir William Osler (one of the most influential physicians in history) was right, says Keng Hong, when he said that the goal of physicians is "to cure sometimes, to relieve often, and to comfort always. And that's true, some things are not treatable and you may not be able to get rid of it forever, and the patient may have to live with the condition, but you can help them to cope."

"No cure, or not curable is not the same as not treatable. You can still live better if you have treatment as opposed to not getting treatment at all. For example in the case of diabetes, if you don't treat it, you will go blind," he says.

The point really is "treating to target". Especially in rheumatology, where you're dealing with auto-immune diseases, which he likens to "a friendly fire" because your immune system is overactive and "fights its own troops." He adds that the patient may not feel anything for a long while, and by the time the symptoms show, it's too late. Still it's a situation which needs proper and proactive management, because "you don't want your patient to have joint pain", he says.

Because of the long-term nature of the diseases he treats, Keng Hong says that most patients invariably become his friends. Two of the illnesses that he treats commonly are rheumatoid arthritis and lupus. The latter is more prevalent and severe in Asians, and nine times more (young) women get it. He shares, with a chuckle, that the disease is a great imitator of many diseases, and it isn't uncommon for a patient to tell him that they think they have it. "In the age of the Internet, so much information is out there but methods and statistics can be confusing. It's fine for patients to surf the Internet but they still need to trust the doctor", he says. He does feel however that it's good nonetheless if that spurs discussion, something that he strongly encourages.

According to the introspective doctor, the greatest challenge in the field of rheumatology is that "we've entered the era where we can get our hands on much better drugs and treatments, and understand diseases even better. Yet none of these 'magic bullets' are 100 per cent full-proof. Hopefully as time goes on, treatment methods too will get better."

When we asked him what his challenges were on a personal front, he says, it really is to have a balance work life, since he wears a lot of hats. He's not perfect, he says, but he’s working at it, and tries to spend more time with the family and cultivate different hobbies.