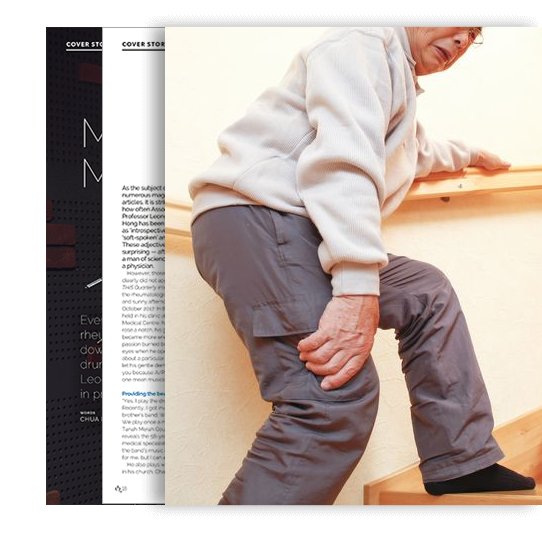 Scleroderma is a condition that can cause skin - including vital organ tissue - to harden and form patches of tough skin, leading to challenges and complications.

Derived from the Greek words ‘sclera’ for hard, and ‘derma’ for skin, scleroderma, or systemic sclerosis, is a chronic connective tissue disease that causes the skin to become hardened. Scleroderma is a type of autoimmune rheumatic disease. It is not contagious, infectious, cancerous or malignant, but can cause symptoms and complications that range from mild to potentially fatal.

The condition occurs when the immune system is impaired and fails to recognise the body’s own tissues and starts attacking them. It is not known what triggers the autoimmune disorder, but it is likely caused by a number of inherited abnormalities that may be ‘activated’ by environmental factors. In some cases, there have also been reports of a scleroderma-like illness which starts after exposure to certain toxins.

When the autoimmune response attacks the body, it causes swelling (infl ammation) and overproduction of collagen. Collagen is the tough protein that builds connective tissues such as tendons, bones and ligaments, and is a building block of scar tissue formation. Overproduction of collagen causes normal tissues to be replaced by excessive amounts of collagen, causing tissues such as the skin to become tough. While the hardening of the skin is one of the most visible manifestations of the disease, other tissues such as those in the lungs, oesophagus, blood vessels and other organs can also be affected, affecting the way they function.

Limited Scleroderma affects mainly the face, hands, fingers, arms and legs. The sclerosis is localised and often contained to several patches of hardened and dry skin around these specific areas of the body.

Diffuse Scleroderma is widespread throughout the body. It can affect any part of the body and is not contained to a specific area. It can also affect major internal organs such as the heart, lungs, liver, kidney and even blood vessels and nervous system.

Scleroderma affects more women than men and most commonly occurs between the ages of 30 and 50.

In its early stages, it may first attack the hands, causing them to swell.

Whichever the form, these are the signs and symptoms of scleroderma:

If you spot any of these signs, it is advisable to seek medical attention.

While there is no cure for scleroderma, early treatment is important to manage the symptoms and prevent it from getting worse. Among the treatment options are steroid medications as well as medications that suppress the immune symptoms and address specific issues.

While hardening of the skin is one of the most visible manifestations... other tissues such as those in the lungs, oesophagus, blood vessels and other organs can also be affected, affecting the way they function.