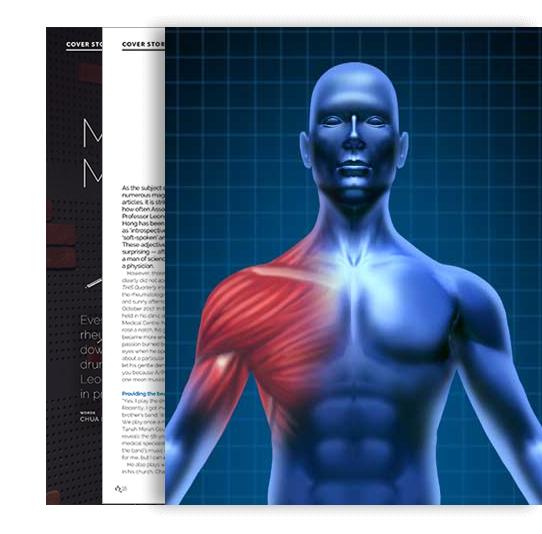 MYOSITIS, ALSO KNOWN AS INFLAMMATORY MUSCLE DISEASE, DESCRIBES THE inflammation of one’s muscles. This is typical of inflammation in any tissue where the pain is usually worse in the morning .

Myositis usually affects larger muscle groups in the body, such as the shoulders, back and thighs. Patients experiencing this condition usually feel weak when performing simple everyday movements. For instance, they may find it difficult to stand up from a squatting position or tire easily while doing activities that require them to lift their hands above their heads, such as washing their hair.

As myositis is a symptom more than a cause, there are many reasons behind why one may be experiencing it. One of the more common causes is viral myositis, which usually occurs during or after recovering from a viral infection such as the flu. Patients with myositis caused by a virus usually have symptoms of a viral infection, such as a runny nose, fever, cough, sore throat and nausea. However, these symptoms may subside days or even weeks before myositis symptoms begin.

Other common causes of myositis include: as a side-effect from certain drugs (e.g. lipid-lowering statins and fibrates), autoimmune conditions (where the body does not recognise its own cells and tissues as its own and starts attacking it) and cancer.

It is important to note that there is a subgroup of myositis within the symptom known as polymyositis (PM), which describes a condition where many muscles – as opposed to just one in myositis – become inflamed. This is in contrast to dermatomyositis (DM), which is characterised by inflammation of both muscle and skin.

Both PM and DM are potential indicators for something more serious, such as an autoimmune condition or as a sign of cancer. If you experience any of the described symptoms above, see a doctor immediately.

In order to diagnose myositis (as well as PM and DM), the doctor will look for a pattern of weakness consistent with muscle disease in the patient. Blood tests may also be performed; if the patient has myositis, he will present with an elevated amount of muscle enzymes such as creatine kinase and aldolase. However, these tests are not necessarily conclusive as over-exercise can occasionally cause the patient to present with the same symptoms. Further tests, such as a muscle biopsy or electromyogram, may be performed if the outcome is still uncertain. A muscle biopsy is the most accurate test for diagnosing myositis; the doctor identifies a weak muscle, makes a small incision, and removes a small sample of muscle tissue for testing.

The treatment for myositis varies according to the cause. For instance, inflammatory conditions causing myositis may require treatment with drugs such as prednisone and imuran (azathioprine) that suppress the immune system. Viral myositis usually does not require specific treatment while myositis caused by bacteria is uncommon, and usually requires intravenous antibiotics to prevent the infection from spreading. Myositis related to a drug is treated by stopping the medication. In cases of myositis caused by statin drugs, muscle inflammation usually subsides within a few weeks after discontinuing the medicine.

If you ever experience pain or fatigue in your muscles, do not worry: Muscular aches are common and the causes are just as varied. If the pain is associated with weakness, however, it may then suggest a more serious condition: See a rheumatologist if the pain and weakness persists.