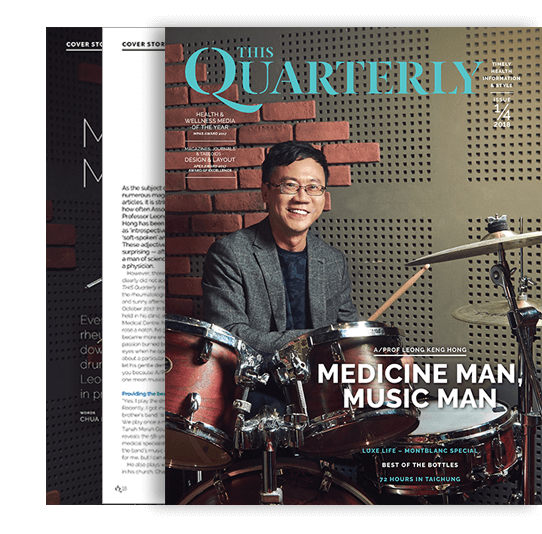 Every once in a while, a studious rheumatologist must let his hair down and follow the beat of his drums! Meet Associate Professor Leong Keng Hong, who has been in private practice since 1997

As the subject of numerous magazine articles, it is striking just how often Associate Professor Leong Keng Hong has been described as ‘introspective’, ‘quiet’, ‘soft-spoken’ and ‘genteel’. These adjectives are not surprising — after all, he is a man of science and a physician.

However, those descriptors clearly did not apply when THIS Quarterly interviewed the rheumatologist one warm and sunny afternoon on 20 October 2017. In that session, held in his clinic at Gleneagles Medical Centre, his volume rose a notch, his gestures became more energetic and passion burned bright in his eyes when he opened up about a particular topic. Don’t let his gentle demeanour fool you because A/Prof Leong is one mean musician.

“Yes, I play the drums. Recently, I got involved in my brother’s band, Wild Ginger. We play once a month at Tanah Merah Country Club,” reveals the 58-year-old medical specialist. “Actually, the band’s music is slightly old for me, but I can adapt!” He also plays with a band in his church, Chapel of Christ our Hope. “My church caters to families with severe autism,” he shares. “As it is an autism-friendly church, some of the members with autism are noise-sensitive, so sometimes I play the cajon [a box drum] instead.” <

A/Prof Leong emphasises that he is a self-taught musician; while he is confident of providing the beat for the pop and evergreen tunes in Wild Ginger’s repertoire, he feels his musical foundation isn’t firm enough to tackle genres such as jazz, which demands more complicated rhythms from the drums.

When he is not making music, A/Prof Leong is listening to it. “Music is a big part of my life,” he states. “I like classical music and go watch the SSO [Singapore Symphony Orchestra], but my musical taste is very varied.” He cites jazz fusion bands Spyro Gyra and Casiopeia, Mandopop queen A-Mei as well as Japanese R&B singer Utada Hikaru as just a small sampling of artistes he has on his playlist.

When asked if his Christian faith played a part in his decision to be a doctor, A/Prof Leong replies, “Honestly, no. I only became a Christian after I entered medical school. Many people become Christians in times of crisis; for me, it was not like that.” He reveals that when he got into medical school, he started to contemplate existential issues, and was asking himself questions such as, “What is the meaning of life?”, “What happens to you after you die?”, as well as “What is the purpose of everything?”. He has been a Christian since 1978.

The desire to pursue medicine has been in him since he was a child growing up in No. 51 Club Street. “I’ve always wanted to be a doctor because people close to me have had a lot of very severe diseases; in retrospect, most of them had autoimmune diseases.”

Autoimmune diseases are significant to A/Prof Leong because his clinic sees a lot of patients with such maladies. The medical speciality of rheumatology only started in the 1960s. “Rheumatology is very young,” he clarifies. It is a discipline that is the internal medicine counterpart of orthopaedic surgery, and is concerned with the health of the bones, joints and connective tissues. Although there are about 100 different conditions that fall under a rheumatologist’s purview, A/Prof Leong’s clinic sees mostly patients with autoimmune diseases such as rheumatoid arthritis and lupus, the No. 1 and No. 2 conditions he treats most frequently.

And just because he deals with bones and joints doesn’t mean that all his patients are old folks experiencing wear and tear. “More than half my patients are young,” he points out.

“There were two things that attracted me to rheumatology,” A/Prof Leong states.

The first is that rheumatological conditions tend to affect multiple organs and systems. “Even rheumatoid arthritis affects your eyes, your lungs, etc,” he elaborates. This is interesting for him because “there is still a breadth of internal medicine you need to be familiar with”. This is different from other specialities that focus on oneorgan systems only.

The second thing is that rheumatology is linked to immunology. Targeted therapies in oncology have similarities to what rheumatology does. “So cancer and autoimmunity are like two sides of the same coin; the mechanisms that control both are very similar and that is very interesting to me,” he says.

The proliferation of websites with medical content is a good thing, as far as A/Prof Leong is concerned. He has always encouraged his patients to ask questions, so the Internet has empowered them. “I am not really in favour of doctors who are dictatorial, telling you to take this and that. I think this is a wrong approach,” he stresses. “If you don’t get your patient’s cooperation, it will be an exercise in futility.”

In fact, he will often insist that a patient look up certain issues on the World Wide Web before the next consultation. “Building trust is very important. I am fine with patients trying to find out more. They should, or else there is no point going further.”

He is also of the opinion that no jargon be used and that his medical advice be delivered according to the type of patient he is seeing. “If they are not so educated, you have to use different illustrations. As for those who are very knowledgeable and want a lot of facts, I will give them all the details,” he assures.

According to A/Prof Leong, autoimmune diseases have no cures but tend to settle down over time. However, where there is treatment available to alleviate symptoms, it must be done aggressively to mitigate the overall damage by the time the disease burns out. “We have to keep escalating and changing our drugs to control the disease early. This has been the approach for the past 15 years,” he adds. “So there are diagnostic and therapeutic challenges.” The detective work involved in eliminating suspect diseases and adjusting drugs and dosages to target organs and symptoms is another reason why he was attracted to rheumatology.

A/Prof Leong predicts that targeted therapy will be the next big thing in rheumatology. “These drugs target the immune proteins involved and switch them off,” he explains. There are currently a number of such medications with different targets, such as TNF, IL6, B-cell, T-cell, JAK, etc. Though it is a big advance, it is still not perfect; “there may never be a 100% response as the immune system is very complicated”. Autoimmune diseases are not lifestylelinked; the trigger tends to be infection. “You can’t really prevent infection,” he quips. They are more common in younger people than older people, and usually emerge between the ages of 20 and 50.