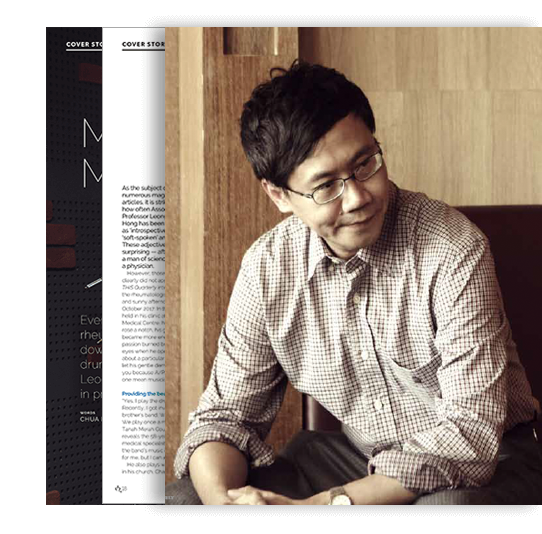 A
Discerning Man
of Joints

This Quarterly chats up with one of Singapore's leading rheumatologist A/Prof Leong Keng Hong on his passion for work, contributions to the society and how this family man's childhood made a difference to his life.

Rheumatology may be a relatively new field in Singapore, but is quickly catching up in the medical profession. A/Prof Leong Keng Hong stands at the forefront of this specialtyand is an internal medicine consultant and expert in bone and joint diseases.

Rheumatology does not affect only the older generation. A/Prof Leong remarked that more than half of his patients are young adults and even teenagers.

“I was attracted to rheumatology because of Lupus. It’s a challenging disease to diagnose as this autoimmune disease can affect any part of the body,” he added. A good combination of clinical skills and basic medical sciences involved in treating this disorder appealed to him and developed his love for this specific branch of medicine.

He is truly dedicated to the treatment of lupus. In 1990, he initiated Lupus Association Singapore (LAS) with another doctor and a group of patients. “Lupus patients endure much suffering, and in the early days, there was no support group for them,” he explained. 21 years later, he continues to play a significant role in this charity organization. He has been Vice President since its inception and finds fulfillment in his committed involvement.

He said, “80% of LAS revenue goes towards direct patient care such as ward visits, educational talks, brochures and audio-visual materials, and more importantly, a financial welfare scheme that helps patients who are in need.” It’s a cause he believes very strongly in and works hard to rally for. “It is my hope that more people will give to the Lupus Association, as donations are tax exempt,” he added.

A charitable man, he finds peace and happiness lending a hand to those in need. He’s actively involved in the Singapore Action Group of Elders (SAGE) Counseling Centre and does voluntary work in a Christian nongovernmental organization in China.

When he’s not busy with his medical practice or helping others in social work, he involves himself in many other interests. Musically inclined since his teenage years, he played percussion instruments in church and other social band groups. He also has a black belt in aikido.

A/Prof Leong considers travelling as one of his greatest interests. His work frequently takes him out of the country. He visits Europe and the United States at least twice a year for conferences. On top of that, he takes about three to four trips annually for leisure.

He is upbeat whenever he talks about his travels. He said, “I generally prefer Europe as I find the environment, its history and the various customs and culture interesting.” His favourite holiday destination in Europe is Paris - The City of Romance which he and his family recently ventured in June this year.

Explaining the thrill of travel, he said, “I get to see and experience new things. We also look for interesting and good food.” He reminisces about his trip to the Galapagos Islands and Machu Picchu as one of his most memorable trips.

Juggling between family and work, A/Prof Leong is one very busy man. He said, “I may retire after working for another ten years. However, I will still continue with teaching activities and also community work.” Teaching is his passion. He started out with postgraduate students and family doctors, recently taking on medical students in his capacity as an Adjunct Professor in NUS.

It could be his humble upbringing that made him the down-to-earth person that he is today. He was the youngest of four children. A/Prof Leong recalled, “I grew up in Chinatown in the early days when life was tough for my parents and grandparents who were rather poor. But I have very fond memories of my childhood. It reminds me that money does not always bring happiness.”

When asked about his fondest childhood memory, he particularly remembers his grandmother who lived with him when he was a young boy. He added, “She embodies love and sacrifice. I remember her having to pawn her much treasured jewelry during times when the family was in dire need for money.”

His childhood did embellish a mark on his future, driving his ambition to one day become a medical practitioner. “I wanted at one time to be a journalist or lawyer but when my mother and grandparents had severe illnesses, I decided then that I wanted to be a doctor,” he said.

And since then, he has never looked back. A/Prof Leong considered he was truly blessed when he was offered the appropriate specialty at the right time, being extremely grateful to be given the opportunity to be trained in rheumatology. He is keen on raising further awareness on his scope of work. He lamented that many of his patients with autoimmune diseases resort to inadequate and inappropriate treatment, which often leads to disastrous consequences.

To raise the profile of Rheumatology, he’s doing his contribution as the Chairman of the Chapter of Rheumatologists, College of Physicians, Academy of Medicine, Singapore.

He certainly has a lot going on for him. “My greatest challenge in life is to maintain a healthy balance in my various roles as a doctor, teacher, husband, father and also being a useful member of the community,” he said. It’s something he continues to strive on daily. He added. “Work life balance is a cliché but it is not easy to achieve. I have somewhat improved but I am still working hard on it.”

The future maybe uncertain but one thing remains for sure-he is one man that will never stop trying to better himself and improve on the life of others.